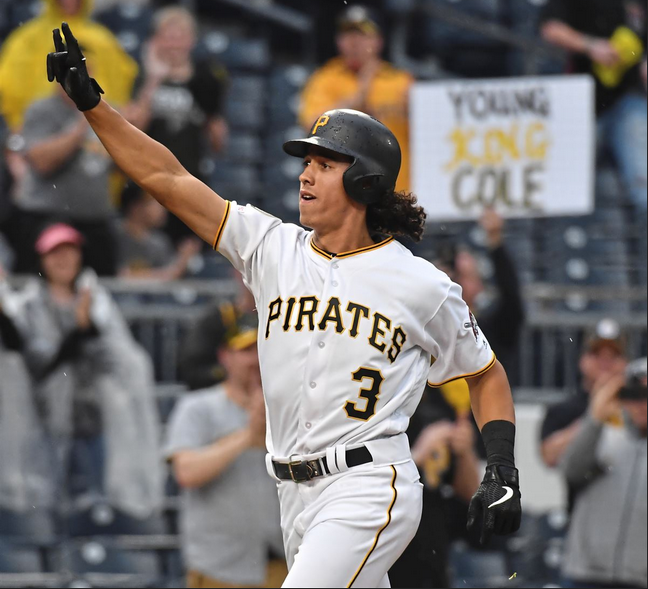 It was a good day Saturday for the Pittsburgh Pirates as the baseball club came away a 3-1 win against the San Francisco Giants in 5 innings after being called due to rain.

The Pirates have won five games in row and continue to be in first place in the NL Central, while also being tied with the Tampa Bay Rays for the best winning percentage in baseball. Additionally, the Pirates are tied for the fewest losses in baseball with six. The real news of the day though came prior to Saturday’s game, and it was key reason why the Pirates continued their winning streak.

After the awful-looking collision in Friday night’s game between Erik Gonzalez and Starling Marte, the Pirates called up two of their top 10 prospects in shortstop Cole Tucker and outfielder Bryan Reynolds.

Early reports are that he doesn’t need surgery, but that could change. Director of Sports Medicine Tom Tomczyk, said both men will return this season, but gave no timetable for either past their IL stints.

Tucker and Reynolds both started both played on Saturday though, and had a major impact. Reynolds went 1-for-3 with a single, while Tucker stole the show, going 1-for-3 with the game-winning two-run home run in the bottom of the fifth to give them the lead.

Jameson Taillon picked up his first win of the season, pitching all five innings. Jung Ho Kang also hit another home run, which was his third of the season.

The initial thoughts I had once I heard the news about Marte and Gonzalez was that, in a way, it worked out for the Pirates. It’s early, but it looks like Marte will come back much sooner than expected after he left the game needing to ride a cart, but it also gives the Pirates a long look at their future starting shortstop in Tucker.

Prior to the season, Tucker was the fifth-best prospect in the system and was coming off a great Arizona Fall League and had an awesome start with the Indianapolis Indians, where he was hitting .333 with three home runs, seven RBIs and five stolen bases in just 13 games.

If he can carry those numbers over into the major leagues, then the Pirates are going to find themselves with a great leadoff hitter and a solid glove at shortstop. You couple that with the return soon of Elias Diaz, Gregory Polanco and Lonnie Chisenhall and this team will start to take form offensively around a great rotation and a bullpen that has been better recently.