The Top Destinations for Noah Syndergaard 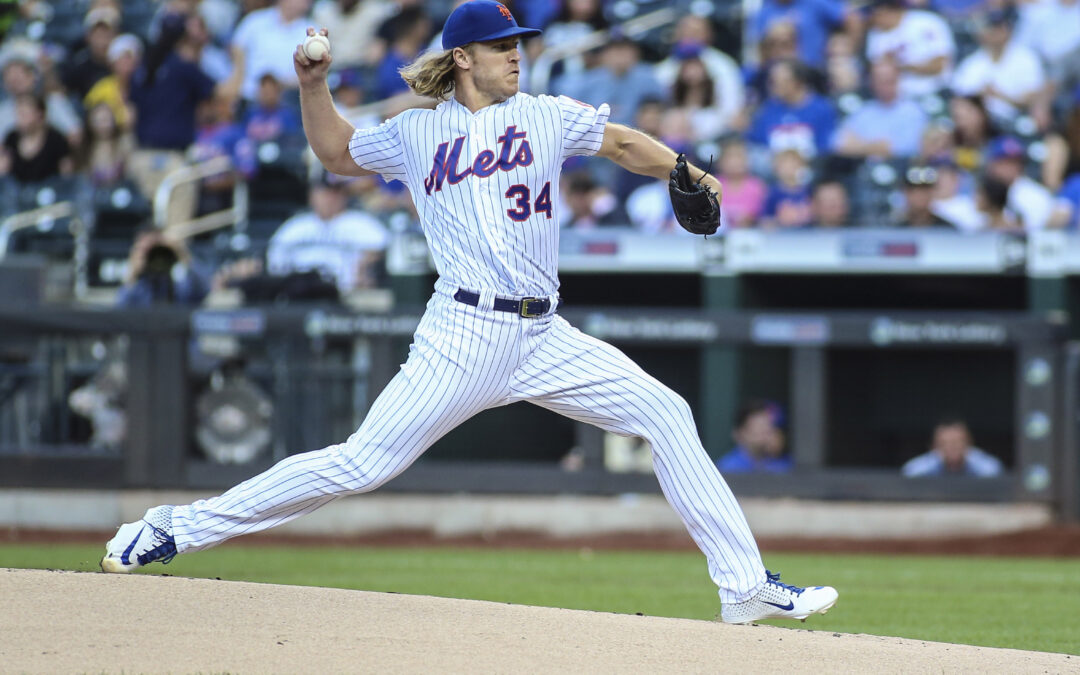 The 2019 MLB regular season has been a disaster for the New York Mets. Based on recent trade rumblings, it may get worse before it gets better for fans, too.

While the club started this year with postseason aspirations, their 48-55 record has turned them into sellers at the trade deadline. Trading away veterans on expiring contracts — i.e. Todd Frazier, Jason Vargas, and Zack Wheeler — appeared to be the plan. Earlier in July, general manager Brodie Van Wagenen told reporters they’d be tweaking the roster in order to retool and compete in 2020.

That meant players under team control — like Jacob deGrom and Noah Syndergaard — wouldn’t be available. Well, now things have changed in the shadow of the deadline, and instead of Wheeler being the Mets’ biggest trade chip, it’s Syndergaard.

Whether a deal involving Thor actually happens or not remains to be seen. However, this sure feels more real than it has in the past. Syndergaard hasn’t been his usual dominant self through 126.2 innings, though. He’s posted a 4.33 ERA and 1.26 WHIP with a strikeout rate (23.8%) and walk rate (6.8%) that have continued going in the wrong direction.

Still, he’s a front-end of the rotation talent with All-Star potential (he’s already been to one midsummer classic) and even has some postseason experience to boot. Best of all, the hard-throwing right-hander is still about a month shy of his 27th birthday and is under team control via arbitration through 2021. Whatever team lands Syndergaard will certainly be receiving a lot of wagers on the sports betting website BetOnIt.org.

Even with the underwhelming results (compared to the rest of his career), the Mets could certainly get more in return if they trade Syndergaard instead of Wheeler, who they’re reportedly thinking about extending now.

Just about any team would like to have Thor in their rotation, but not everyone can afford the cost when it comes to prospects. Let’s check out 10 potential landing spots for the right-hander.

As with all trade rumors, there will be teams that make sense as a potential landing spot, but due to extenuating circumstances, it’d be hard seeing a deal come together. The four teams falling into this category for Syndergaard include the New York Yankees, Atlanta Braves, Los Angeles Dodgers, and Milwaukee Brewers.

The Yankees have been connected to the game’s top available pitchers for some time now, and for good reason. On a club that’s among the best in baseball, the rotation is clearly the weakest link. This isn’t the first time the Yankees and Mets have been linked in trade talks, and while BVW may have a better relationship with Brian Cashman than the previous regime, it’s still the Mets and the Yankees. Trading Syndergaard to the Bronx would be a PR nightmare. You’d think this would be a last resort, unless the Bronx Bombers completely overwhelm Van Wagenen and company.

The other worst-case scenario in this situation would be sending the right-hander to a team within their own division, like the Braves. That’d be another PR disaster and New York would have to face him more times than they’d probably like. Atlanta has the farm system and young MLB-ready arms to put together an intriguing package, which the Mets have reportedly pointed out themselves. Still, I’ll believe New York really being OK with this until I see it happen.

When looking at results, the Dodgers don’t necessarily need help in their rotation, which is among the league leaders in both ERA and fWAR. This has happened thanks to the contributions from Clayton Kershaw, Walker Buehler, and Hyun-Jin Ryu, along with smaller contributions from Ross Stripling and Rich Hill.

This is the kind of forward-thinking move Andrew Friedman would make for LA. But since the rotation isn’t a huge need at the moment and the Dodgers have historically opted to not overpay during the current front-office regime, it’s hard to see something like this coming together.

The Milwaukee Brewers have their own rotation issues and seem like a natural trade partner with New York. Jimmy Nelson’s return didn’t go as planned, and now both Jhoulys Chacin and Brandon Woodruff are on the injured list. However, they don’t appear to be as hot on Syndergaard’s tail as other interested teams, and it also doesn’t seem like they have the farm system to pull something off.

One of the constant advantages the Padres have had over other teams the last couple years is an incredibly deep farm system. A report from Joel Sherman of the New York Post says New York views San Diego — a team that’s targeted Syndergaard since last winter — as one of the very few organizations with the prospects to make a trade happen.

The Padres have been working hard during their current rebuilding process to get ready to compete in 2020 and 2021. The signings of Eric Hosmer and Manny Machado are proof of that, along with the electrifying play of Fernando Tatis Jr.

However, general manager A.J. Preller has a very young and mostly unproven rotation currently in place. Syndergaard would immediately become their ace, and his contract status fits perfectly within the timeframe of when they’d like to be competitive again.

They’ve already taken steps this year, too — although a 48-55 record isn’t anything to write home about, it’s trending better than last year’s 66-96 mark. Getting another high-profile player on the roster would only help this winter with regard to any of the organization’s top free-agent targets.

Despite everything they’ve been through this season, the Angels are still lurking on the outskirts of the wild-card race and are doing their due diligence on available arms:

As Jon Heyman notes, the Angels used to continually have one of the league’s worst farm systems but have spent a lot of time and effort rebuilding it. While this may not be enough for the Mets to consider a deal, it allows them to at least sit at the table and have a discussion.

The unfortunate death of Tyler Skaggs, along with a trip to the IL for Andrew Heaney has left Los Angeles’ rotation rather empty when it comes to experienced starters. Syndergaard would obviously be a boost right now, but he’d also be a boost next season when paired with (hopefully) a fully recovered Shohei Ohtani.

This will be a tough situation to navigate for Los Angeles since they’re not exactly right in the thick of the playoff race. They’ll need to weigh the opportunity cost of going all in. The next few days will likely be crucial in their decision-making process.

Although the Rays are one of baseball’s more innovative teams, it’s tough for any organization to deal with extended absences from top rotation contributors like Tyler Glasnow and more recently, Blake Snell.

This is an accurate portrayal of how Charlie Morton is feeling right now.

Tampa Bay has relinquished its lead in the AL East to the Yankees and don’t appear equipped to make up the difference at this point in the season. However, they’re still in prime position for a wild-card berth. This feels like the kind of situation where the Rays would be comfortable in taking a risk with regard to giving up prospects for Syndergaard.

His still affordable based off his current $6 million salary, and the two years of team control past 2019 would give them leverage to eventually flip him and get something meaningful in return. And of course, the organization was linked to the right-hander over the winter.

So they clearly like him, and given their current situation, they might be more apt to make a bold move.

While the A’s are having a tough time chasing the Astros in the AL West, they have plenty to play for when taking a look at the wild-card race. And sure, they just made a trade to help the rotation, but it’s not as if Homer Bailey is going to stop Billy Beane from pursuing a pitcher like Syndergaard.

Marco Estrada and Sean Manaea are both currently on rehab assignments, but it’d be hard to completely count on them down the stretch based on how long each of them have been on the sidelines.

Pulling off a deal like this would likely mean AJ Puk and/or Jesús Luzardo’s names would be included, which would be a high price to pay. However, the San Francisco Chronicle‘s Susan Slusser recently added some intrigue to something going down:

It doesn’t hurt that Sandy Alderson — who acquired Syndergaard via trade during his time as Mets GM — is now a special advisor to Beane in Oakland. He provides the kind of insight into the player himself that not many others can do.