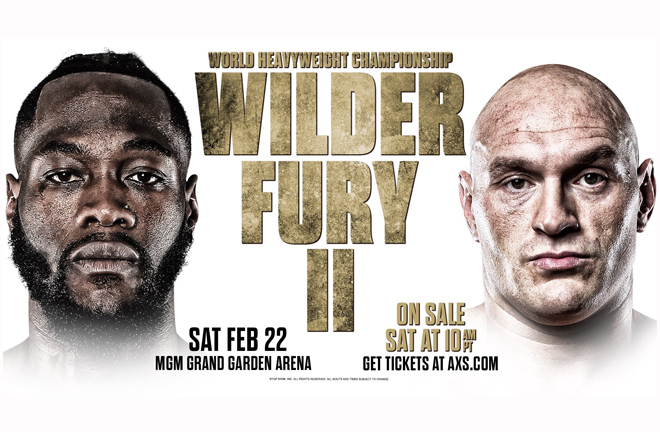 It’s arguably the most highly anticipated boxing match of a generation and now we know when and where Tyson Fury and Deontay Wilder will face off for fight number two; the MGM in Las Vegas.

A recap of fight number one

On 1st December 2018 the Gypsy King ventured to the US to take on Alabama born Wilder in a fight that had been brewing for months with the pair butting heads regularly. There was a great deal of fan fare around the fight and the people put their money where their mouths are with the brawl attracting audiences in 34 countries.

Wilder is known for his punching ability, but Fury is a more technical boxer and was able to dodge a lot of Wilder’s offense in the early stages thanks to decent movement. That said, it was the Bronze Bomber who landed the first significant punch of the fight as a jab brought blood from Fury’s nose but a switch of stance – to southpaw – from Fury at the half way stage gave him an advantage and he began registering on his man.

As the fight wore on, it was much the same with Wilder hitting big – sending Fury down in round 9 – and the Brit landing with a better punches thrown to contact percentage but it was the final round that truly shocked the world. Wilder jabbed with a right and then a ferocious left hook rocked Fury’s head leaving him flat on his back. Every person in the arena thought the fight was done but Fury rose from the canvas to see the fight go the distance.

The judges scored the bout as a tie; the crowd were unconvinced with boos ringing out around the Staples Center in protest against the decision not to award Fury the win – and so we have a rematch.

What they’ve said ahead of the second fight

Of course, both men have been quick to talk up their prospects ahead of the recently confirmed rematch. Wilder took to Twitter claiming ‘Fury will not be getting up off that canvas’ whilst Fury has also indicated he’ll be going into the ring with the aim of knocking Wilder out as he knows he ‘will not get a decision in the US’.

The pair clearly have respect for one another, which was evident at the end of the last fight but the trash talk is up and running already with insults of ‘fear’ and ‘dress sense’ already thrown around in a press conference held earlier in the week.

How many will tune in?

Some boxing experts have predicted that a rematch between the two undefeated heavyweights could eclipse boxing records whilst Bob Arum has projected two million pay-per-view purchases from the USA alone, which Arum believes will be achievable thanks to a marketing push during Super Bowl 2020.

If Arum’s forecast is anywhere close to accurate it would see sales increase by a multiple of six from the original fight and give the worldwide purchases a serious chance of breaking the 4.6m record set by Manny Pacquiao and Floyd Mayweather Jr.

Fury is unquestionably the better boxer of the pair but in Wilder you have a man who is capable of KO’ing anyone. If Fury is true to his word that he’s going after a black and white victory – rather than a point win – then it could be his downfall. Then again, Fury is no fool and don’t be surprised to see him work Wilder around the ring for 36 minutes before taking a unanimous award from the judges. The outcome is more difficult to predict than the Kentucky Derby 2020 odds, but one thing is for sure, we’ll be tuning in to see how it all unfolds.